DID MICROSOFT JUST TURN THE TABLES FOR ITS PARTNERS AT MICROSOFT InSPIRE 2019? 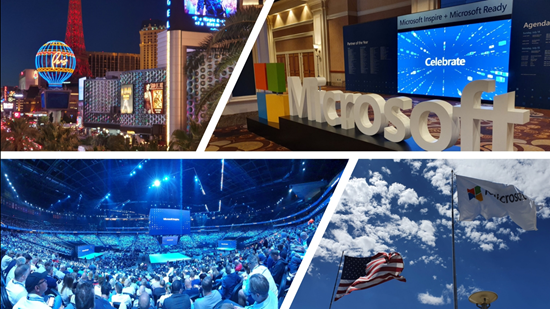 What a week it has been at Microsoft Inspire 2019.

First of all Gavriella Schuster , Corporate VP for One Commercial Partner Organization, had to back down from Microsoft’s decision to remove Microsoft Partners Internal Use Rights. I personally think that Gavriella was sincere when she asked for forgiveness. She did that in a very professional and open way. It has been a lot of buzz regarding Internal Use Rights and I know that IAMCP, the partner organization for Microsoft, has been occupied by this subject since it was reviled by Microsoft last week.

A reflection I have regarding this story is that it actually contradicts the intended message from the Core Note (keynote) on Monday morning... which was that the level of trust needs to be stronger than ever before. To gain trust you need to have a honest and transparent relationship, right?

Microsoft also invited Simon Sinek to the stage at the Core Note, to strengthen the message regarding Trust.

Simon Sinek is on his own league when it comes to leadership and how to present his thoughts. I went to Simon’s session regarding "The Infinite Game", really inspiring talk. It was a session that was completely full, and in one of the largest ballrooms at Mandalay Bay Convention Center.

His session went into detail on why the trust is so important and how to govern an organization along his 5 points.

So why all this talk about Trust?

Well, Microsoft has realized that now we are not only partners anymore, now we  need to look upon the relation as a Partnership. Microsoft is not only a software company delivering software products, cloud services and compute to partners. To scale their business they will actually sell our partner developed products. That’s how you sell cloud and compute at scale.

By this approach Microsoft will be more dependent on its Partners and hence needs to state how important its partners actually is for them in their future growth of Azure and Microsoft 365.

The Power Platform will be increasingly important for partners to adapt to. Microsoft expands the features all the time to include more and more advanced features for Cognitive services, like the new one for Forms. Forms scans documents like invoices and automatically creates key-value pairs for the data to be used in the Common Data Structures. Really exciting, to see the ease of integration and implementation that empowers business analysts to actually create streamlined efficiency improvements in its RPA flows. Using PowerApps to make use of these flows is really easy and the need for advanced Android/IOS developers are removed for internal work flows.

Another really interesting new advanced analytics feature in Cognitive services is Decision. Whatever can return an answer Yes or No, is valid for this one, like anomaly detection or is this a top customer or not. Out of the box. However i don't think that it is ready for everything yet, but Microsoft is putting in a lot of effort into strengthen the Cognitive services.

One session I went to was intended to ease the adoption of IoT Central, by removing boundaries as hardware, worldwide operator SIM Cards (ARM Pelion), first of all, IoT Central has become enhanced and I know that there are exciting features on its way. But the on thing I saw, was the ease to use the Telcos services to provision SIM cards for the IoT units. This service will be fully integrated into Azure Services according to Tom Patton (Principal Program Manager Azure IoT). The demonstration was really good, fully integrated to Azure IoT Central, mobile apps powered by PowerApps executing flows to scan QR codes for easily activate hardware units to be able to track and follow shipments in this use case.

To conclude Ignite (my perspective); If you are there to listen to all "Big Announcements" you might get disappointed. Now a days, it's all in the details. Cloud Services evolves quickly. You need to attend the sessions and you need to mingle with all the partners and the Microsoft representatives.

Partners is the new Black!

Why businesses should care about the Internet of things (IoT)